“Shameless” Co-Star Ruby Modine: “With Nudity, I Feel That It Is A Costume.”

It is definitely nerve wracking, as this is my first time experiencing working with nudity in Shameless. With nudity, I feel that it is a costume. Just like you put on a costume to portray a character, that nudity is just another form of a costume. That being said, I was extremely nervous. I was very grateful though, Jeremy Allen White (Lip) is just so professional and so great to work with. He makes me so comfortable and if I have any questions about anything, he will talk to me about it. As nervous as I was, he helped me so much, as did production. “Shameless” deals with that all the time, the nudity. It is a professional set and they really know what they are doing, which definitely helps, it helps to this day.
I did tell my dad and my brother Boman that they are not allowed to watch “Shameless”. I pick certain scenes that I like and I will show them those, but all together i don’t want them to see. It is so random and so quick when nudity happens on “Shameless”. 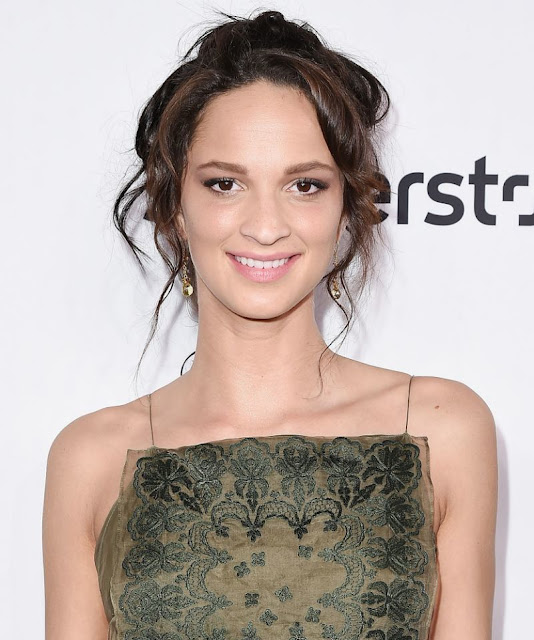 Like so many before her, Ruby Modine is an heir to Hollywood royalty. The daughter of actor Matthew Modine may come from a Hollywood pedigree, but she is definitely paving her own path to success. Between her role as Sierra on Showtime’s “Shameless” to her part in the ensemble “Happy Death Day” , Modine is still finding time to hit the recording studio for both original music as well as sublime covers (see below). I sat down to chat with Ruby about what is coming up on “Shameless” to her music, to what it is like coming from a Hollywood family, yet carving out her own uniquely wonderful niche in Tinseltown.

Q: You are an heir to Hollywood royalty and are making huge name for yourself as Sierra on the hit Showtime show “Shameless”. Working with heavy hitters like Emmy Possum and William H. Macy must be overwhelming times; how do you deal with the pressure?

For one thing, showing up on the set for the first day, it was definitely like the first day of school. At the first table read, I brought my script that I had printed out myself, along with a highlighter, a notepad, and a notebook that I brought along for notes. When I walked in there was a huge room with so many people in it, and of course a script already printed out for us. I just walked in and tried to hide what I had brought behind my back and it ended up beneath my chair. Better to arrive over prepared than not prepared right? 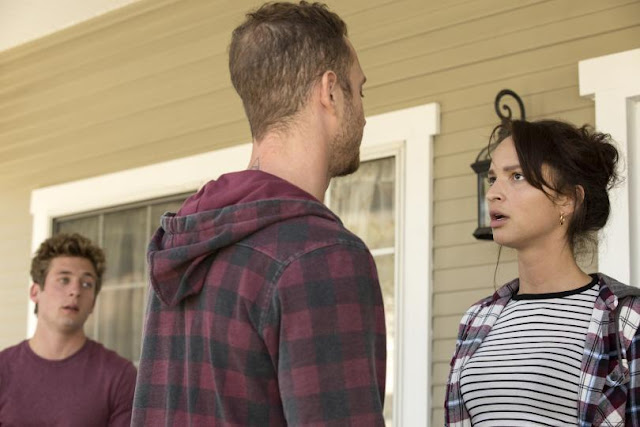 Q: So have you fallen into the “Sierra groove”, and you are comfortable with the character you portray now? Any sneak peeks you can share about the upcoming season?

Absolutely. I feel that jumping into her skin is definitely much easier this season. As far as the new season, I can tell you that this season, the audience will get a little bit more information on both Sierra herself and who she really is.

It is definitely nerve wracking, as this is my first time experiencing working with nudity. With nudity, I feel that it is a costume. Just like you put on a costume to portray a character, that nudity is just another form of a costume. That being said, I was extremely nervous. I was very grateful though, Jeremy Allen White (Lip) is just so professional and so great to work with. He makes me so comfortable and if I have any questions about anything, he will talk to me about it. As nervous as I was, he helped me so much, as did production. “Shameless” deals with that all the time, the nudity. It is a professional set and they really know what they are doing, which definitely helps, it helps to this day.

Q: So it’s safe to say that these are the shows that you definitely don’t let your father watch though I would think!

(laughs) No, I did tell my dad and my brother Boman that they are not allowed to watch “Shameless”. I pick certain scenes that I like and I will show them those, but all together i don’t want them to see. It is so random and so quick when nudity happens on “Shameless”.

Q: One thing your family can all listen to is your music. “As Tears Go By” is an incredible remake of a Rolling Stone classic that you have done. For people that have never heard your music, how would you describe your general vibe and sound to them?

I appreciate hearing that! I don’t think that there is really a way to describe it, since I haven’t come out with an album yet that has really stuck to one genre. I just think I write music, then I go record it, and I am part of a great team and I love them so much. I think the word that I could use is “eclectic”. Not only do I do covers, but the original material I write always sways into a different genre, you know? There is not one specific one. What I am excited about is that I am getting ready to work with my friend Zachary Murdok, who I have been wanting to work with for so long. We are hoping to put together a few songs that tell a story that will be of the same genre. That is really exciting, but that is all I will say about that. Until I start working on it, I don’t want to say too much.

Q: You can tell me about “Happy Death Day” though; what a perfect project to be a part of during what is going to be the spookiest night of the year!

It is my favorite time of the year too! My parents got married on Halloween, and Friday the 13th is our family’s lucky day! In some ways, my family has always reminded me of “The Addams Family”! (laughs)

Q: Is it hard jumping into something super spooky right after something as different material wise as “Shameless”

Well, I did a movie called “Central Park” which was also a horror film, so I had a bit of experience in that genre under my belt. I was hoping to jump into an acting class after “Shameless” wrapped, as we are always looking to better our craft. We are aways learning. I was blessed to have to jump into “Happy Death Day” two weeks after we wrapped: champagne problems right? It wasn’t hard, it was just different. Television and film are different in certain ways, yet similar in others. It was a really great experience. It wasn’t hard, but there are a few complications that I worked out.

Q: Speaking of horror, have you checked out “It” yet? That film is redefining what a horror film is, with its huge commercial success and utterly terrifying material!

I have not yet, but I am making plans to asap. It’s funny I saw Finn (Wolfhard) at the Emmys and I told him that I was going to see it, but I was very nervous to see it at the same time! (laughs)

Q: So was that your first experience attending the Emmys?

It was absolutely amazing. I saw a lot of my friends, but I saw (“Veep” star) Julia Louis Dreyfuss, and she is one of my biggest idols. “Seinfeld” is my absolute favorite show and it always has been, and she also knows my dad. See, here’s the thing; when you grow up with parents in the industry, these people you grow up admiring and fawn over know your parents so you say to yourself “ok I’ll try to be calm” (laughs). I lost my mind over here, and I was talking to her telling her that when I wasn’t watching “Seinfeld” I am watching “Seinfeld” bloopers! She laughed about that! (laughs).

Q: Your father was in the film “And The Band Played On” based on the book, and that film defined the AIDS generation in the early years. You are growing up in a time where education, treatment and the LGBT community have taken such strides. Is it somewhat mind boggling to look back and see how much things have changed?

It’s history; It’s like reading a history book for me. You look back and you look at things now and you wonder what is going to be happening in the future. I think when it comes to film, when you are going to be talking about something as heavy as the content was in “And The Band Plays On”, you wonder what is going to happen. It is so wonderful that in the film industry you get to show what happened and you get to do it in an unedited way. I think in the film industry we have come much farther in what we are honest about because I feel like there may be less fear. It is great to look back at that film and see how things have progressed, stayed the same, or unfortunately regressed. 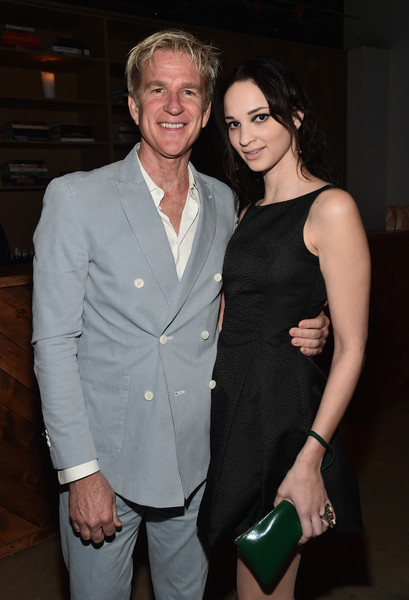 Q: Five years from now, where are you?

I still want to be doing what I love, which is acting. I still want to continue doing my music. I want to hopefully be much wiser than I am now. I turn twenty seven this year and I just told my family at dinner that I loved the number twenty seven, I just really love that number. I hope as I get older I get more enthusiastic about my number. I see myself happy, I see myself working.

Q: What inspires you on a daily basis?

I am inspired by everything. I love the sky a lot. I go up to my roof every morning and watch the sunrise and at the end of the day I watch it set, that is a ritual of mine. The music I play, everything around me inspires me. My family is a huge inspiration to me, my loved ones, the people I am lucky enough to work with. I am on a show with such great actors! My family, my friends, are all so great. I find inspiration in almost everything , even the negative, i can take that and I find strength there. When something inspires me, I always write down or photograph. If I made a list of everything that inspires me, it would go on for days. That is where my music comes from; I got funded to write four original songs several years ago and I continued down that road since then. Anything that comes to mind; anything that makes me laugh, anything that makes me think,, I always write them down so I can go back to them. That makes me really happy that I have that freedom to write them down, take photos, and look back at the things that I will never forget.
Previous Post: « Yuri Kijima – Meatball Machine Kodoku
Next Post: Katherine Waterson’s shapely plot from The Babysitters »