Q: Was this the first sex scene you’ve filmed?

Yes, it was! I was incredibly nervous. For the first 10 minutes I was like, “I can’t believe I’m actually jumping into this!” But I knew even before I got the role that it was something I’d have to do, and the way Outlander does its sex scenes is very sensitive to all parties concerned. Sam does them all the time, and I think he may have been a little nervous because he does them all the time with Caitriona! All of a sudden he had this other girl he has to do it with. Every time I got nervous, I just focused on him and I was fine. I don’t know if he knows this, but I definitely used him to ground me and bring me back to reality every now and then.

Q: What were the mechanics of filming the scene like?

We talked through it with the director, [Brendan Maher], so we knew what it would look like. Still, you never really know until you get there on the day how the clothes come off and who goes where. It’s very technical, and not what people think. We’re both just trying to figure out how to make the other one comfortable, and I wanted to sit there and have a good laugh about it [with Sam], which we absolutely did! What people don’t know is that we filmed that scene on Thanksgiving Day, so I had to skip out on Thanksgiving feasting and instead be in the middle of Scotland doing a sex scene with a stranger! It wasn’t the worst way to spend Thanksgiving, either. I was doing what I love, and I was working with an incredible actor.

Q: It’s not going to be easy for Outlander fans to watch Jamie in a passionate sex scene with someone other than Claire. Are you prepared for any blowback?

Someone tweeted the other day that they’re going to close their eyes through this episode. And I said, “Don’t do that, you’ll miss all the fun!” I don’t think Sam had a terrible time shooting the episode — hopefully he was able to enjoy it a little bit. [Laughs] So yes, I’m ready to field all the fan questions. It’s fun to be part of a heated conversation instead of one that’s dry and dull. People just need to remember that it is just a story and she is just a character. But she’s also a character who represents a human who is dealing with struggle and turmoil. Maybe it’s a good thing if people can relate to her in different aspects of their lives.

One of the best nude debuts of the year. Hannah caught my eye and jolted my cock into life when she was cast in Mercy Street alongside my perennial fav MEW. The 24-year old is still relatively a newbie to the acting biz. While I’m tad surprised with her getting nude in a passionate love scene, I shouldn’t be considering Hannah is part of the sexting generation. Hannah and fellow actresses of her generation shouldn’t have any issues with onscreen nudity if it’s warranted. It was definitely justified in this case.
Also, in this era of diversity, white actors have to work doubly hard to land worthwhile roles and be adaptable in carving out a long-term, fruitful and sustainable career.
Honestly, I thought Hannah was like MEW in boobies department. ‘Corset‘-ed in MS and rarely checking out the actress via social media made sure I had a preconceived impression of Hannah bod-wise.
I was pleasantly shocked to discover a chick packing pert B-cups with delicious looking nips. The skittishness and vulnerability displayed by Miss James appeared genuine and credible in portraying a virgin about to be deflowered. Maybe because she was bit scared and nervous  – baring it all in front of strangers and later, watched by millions of viewers around the world.
Hannah allowed the more experienced Sam take the reins and conduct the pretend lovemaking. The pretty boy took full advantage by nibbling, sucking and licking the sweetness off Hannah‘s perfect nipple.
When she said ‘May I touch you?‘, I was hoping against hope that for the first time in a mainstream television series with huge fanbase, we will get to see a female performer grasping and stroking a ‘real’ and ‘erect’ cock without any close-up nonsense. Of course, there would have been a brouhaha by the media people and over the top reaction by some viewers but I sincerely believe, because Outlander is a show primarily made for women and much adored by our better halves, the negative noises would have been quickly drowned out by folks that matter, finding nifty reasons and even excuses to justify the explicit scene. 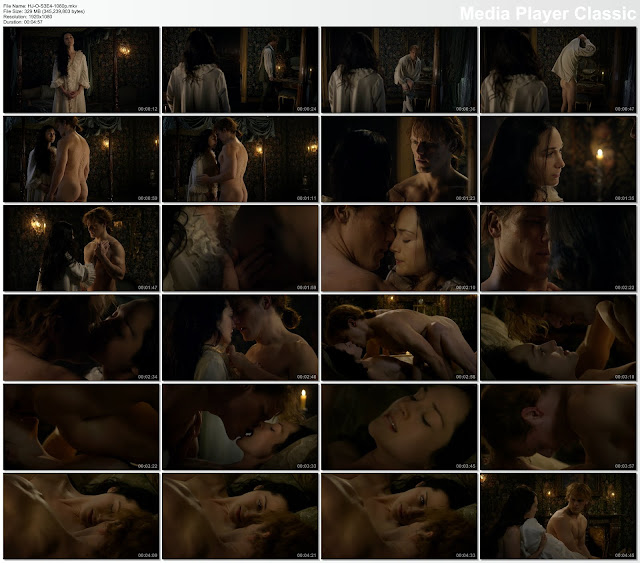